If you had told me that I would ever, in a million years, hold giant cockroaches in my hands, I would have shouted, “NEVER!” Well, as James Bond said, “never say never.” Actually, I had great fun at the “Critter Demo” at Brooks Institute. We bring Dennis Sheridan, a professional animal wrangler, on campus to provide small animals for our students to photograph.

When I saw a young woman start the day scared to death of the critters, and within an hour handling them and photographing them like a pro, I figured I had better not end up being the chicken of the day! So, to prove my critter cred, here I am with two giant Madagascar Hissing Cockroaches (Gromphadorhina portentosa). 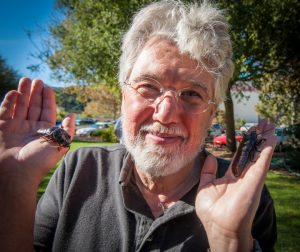 Yes, they do hiss!

In addition to the “look at what I’m holding” photos, we did some legitimate small specimen field photography. Students found or created natural-looking scenes on the Brooks Institute campus in which to place the critters. We all photographed the creatures with either sunlight, modified sunlight, open shade, electronic flash, or a combination of sources.

Here is a Chilean Rose Hair Tarantula (Grammostola rosea) that I photographed in an arid environment set that students built and lit. The main light source was the sun bounced off of a gold reflector. There was a white reflector fill card to the right of the set to control the scene contrast. 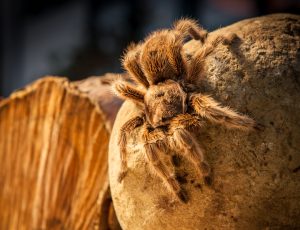 I spent some time with a Giant Madagascar Millipede (Spirostertus Giganteus). I was attracted to the visual parallel of a curling tree fern and the millipede. Since the millipede is so black and fairly shiny, I placed it with the sun coming from the left and placed a 30” x 40” neutral white reflector card on the right side, just out of the frame. Yes, I had to handle this critter too! You can just see the edge of the white card on the right of the shot with my hand. The white card created light-tone reflections on the very dark surface of the millipede. It is important for the photographer to reveal detail and surface quality in the subject. The lighting created good shape, form and dimension, and the reflector card ensured reproducible tones. 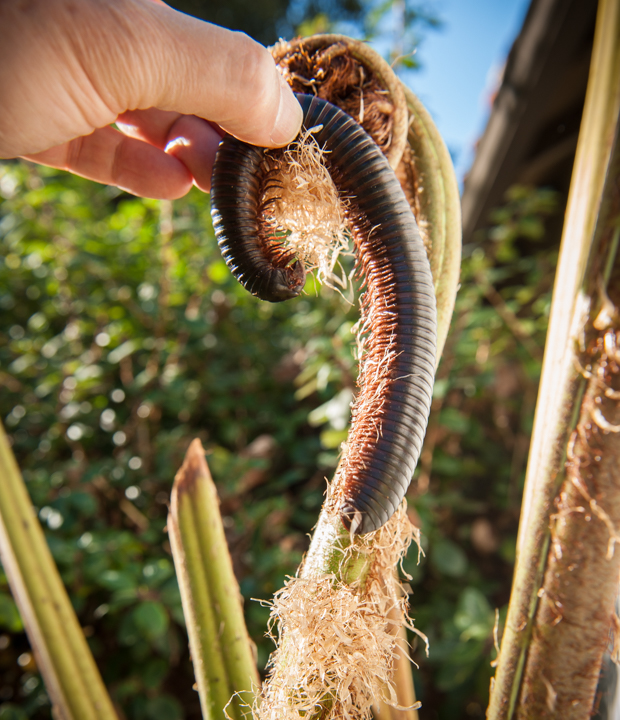 It was so much fun photographing these interesting and exotic animals. Often, just taking a shot with existing lighting results in just an OK image. Adding light modifiers and/or flash takes the image up to the next level and provides more information about the subject, while engaging the viewer with a compelling visual.